Across the globe and in any corner of the world, the Land Rover name and reputation lingers.  As a lifelong and avid British automobile enthusiast, entreprenuer, and dealer... in 2007 Nigel Jebb, of Nigel's Car Place placed his primary focus on Land Rovers.  He lives and breathes a life revolving around Land Rovers, as shown through his career and his hobby. As his Land Rover collection seemed to multiply overnight, customers from all over Arkansas began requesting various Land Rovers.  Through the family business, many friends and aquaintances were made.  It became a very personable type of business with each customer being unique with individualized Land Rover requests.

After attending a few local Land Rover dealership sponsored day events, and a couple of weekend trips to Texas to attend the South Central Area Rover Rally, and socializing with fellow Rover Revelers, the Land Rover addiction grew.  During the summer of 2009, Nigel, his wife, Kimberly, and their three children embarked on a journey that would set in motion the wheels of a new Arkansas based club.  They loaded up and packed to the hilt their beloved 1993 Range Rover Classic, affectionatley called, "Blackie."  The small convoy of friends that included Steve, Brooke, and their daughter Bailey Ballew in their 1998 red pristeen Discovery I, known locally as "Clifford," embarked on a cross country trek to the National Land Rover Rally in Leadville, Colorado.  It was a true Land Rover experience!

Our adventure held spectacular scenery, delicous cuisine, historical sites, and mystique!  The prairie land of Kansas heralded fields of bright yellow sunflowers. We posed by the "Welcome to Colorado" sign with a storm approaching in the distance.  Once we arrived in Leadville and regained our ability to breathe normally, we learned about the history of the mining town.  Later, we would visit a few mines on various mountain trails.  On one of the trails we met Juergon Bahlo driving his 1995 silver Range Rover Classic.  He quickly became our new friend, customer, and even attended an Arkansas rally.  We also met Ann Lockley, writer, also a Range Rover Classic owner and enthusiast, who, later visited Arkansas and hit the trails with us.  Upon returning home from our trip and after conversations with local Land Rover folks and friends, we saw a need for an Arkansas based Land Rover club.We created A.R.S. on the notion, "If you build it, they will come..." and they did come, as we are around 200 members strong just five years later.  Therefore, Arkansas Rover Society was born. 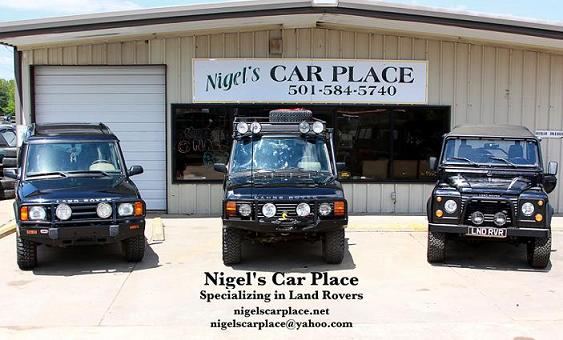 Wading through forestry as the sun sets
by ellebarto over a year ago
More...

Oops! This site has expired.

If you are the site owner, please renew your premium subscription or contact support.